The public opening of J. White: The Territory Ahead runs from 6 to 9pm on Friday, May 17. White is proud of her native heritage, and is excited to share its culture with the show’s attendees. To that end, White has asked Flandreau Indian Reservation chef Francis Wakeman IIII to create several native themed appetizers for the evening. Items on the menu include ground buffalo meatballs, deer sausage infused with sage, fry bread filled with choke cherry wojapi and a wild rice dish.

White’s work ranges from abstract to representational. Regardless of the subject, her work is distinctly identifiable by her use of color as well as the intensity of her brush strokes. Recently, White had a conversation with her friend and supporter Russ McKnight. McKnight suggested White depart from her traditional style to create a body of work separate from the native faces, hands and landscape abstractions commonly included in her pieces. McKnight recommended White simply focus on the landscapes in her works, what he called her “passages of painting.” As McKnight put it, “The imagery may not be immediately identifiable, but that’s where the expression lies. J. White: The Territory Ahead harkens back to the great plains landscaping,” said McKnight.

White embraced McKnight’s suggestion, and soon tapped into something previously unknown and scary to her. White said, “I’m comfortable until people I know and recognize my work come in and say that’s not far enough. You need to go farther.” White continued to describe this exciting process, “It’s not so much about the work I was producing, but it was about pushing myself past the unknown of me. Further, I needed to go further, and I nailed it. I was able to create art that’s still me while creating something totally brand new. I’m a student of life, and I took the opportunity to grow.”

The medium and dimensions for the exhibition are also new to White. Each piece is created on a large canvas with sizes ranging from 3 feet x 2 feet to 9 feet x 4 feet. White normally paints with acrylic, but she created this body of works with acrylic on just the bottom, using oil on top. “Oil is harder, but it gives much more variation on surface texture, transparency and luminosity,” said McKnight. 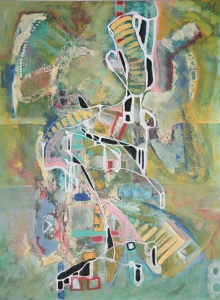 Jennifer White is of the Arikara Tribe of North Dakota, one of only 15,000 to remain in the United States. She is also the owner of Post Pilgrim Art Gallery in Sioux Falls, South Dakota. She has been painting professionally for 8 years, her work has been featured all over the world, and she has won several awards for her work. The most significant of which is the prestigious Red Cloud Indian Heritage Museum Award. She has spent her life with the privilege to show her work in galleries and speak publicly about native art/culture. White’s passion towards and love of heritage and family are of the utmost importance, and it shows in every piece she creates. “At Post Pilgrim, it is a mission to redefine the meaning of what our culture means to us in the present. In order to fully be self-aware, artists need absolute freedom of expression. At Post Pilgrim Gallery-J. White we carry on the long traditions of storytelling through art. At Post Pilgrim we do it with honor and pride.” shared White.